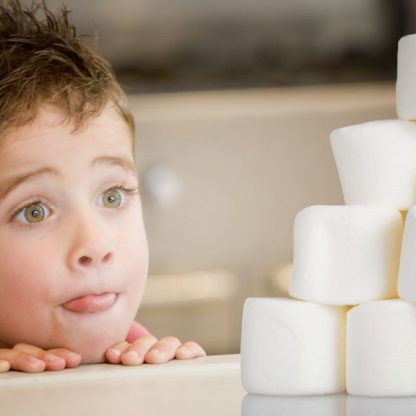 Could Your Child Pass This Test?

Back in 1968, Walter Mischel, a psychology professor at Stanford conducted one of the most famous psychology experiments in history.

The experiment was nicknamed “The Marshmallow Test” and the results were so eye opening that they are still being studied to this very day.

Here’s what he did…

Mischel gave 10 children a marshmallow and gave them two options.

Option 2) Save the marshmallow and when I return I’ll give you a extra marshmallow, at that point you can have both.

What do you think happened?

7 out of the 10 children could not resist temptation and ate the marshmallow before he returned. The average time between the sound of the door closing and the first bite of marshmallow was less than three minutes.

Some of the kids couldn’t even wait 30 seconds…

Fact is….even as adults we struggle with similar dilemmas.

But here’s why this is so interesting….

Mischel and his team didn’t just stop there. They followed the lives of the children in the original experiment and dozens of the experiments that followed.

30+ years later here’s what they discovered:

The children who were able to delay gratification:

They also found that the children who were able to delay gratification were less likely to struggle with negative outcomes like obesity or drug use.

To sum it all up…

What Mischel and his team discovered was that self control is essential to success in life.

Now to me “self control” and “delayed gratification” are just two fancy words for discipline…and one of absolute best ways to develop discipline is through a high quality martial arts program.

I could talk to you for hours about exactly why our program works and show you hundreds of testimonials from parents…but what better way then to come experience it for yourself, firsthand?

If you’re interested in learning more about our martial arts classes for kids then simply click on the banner below to find a Kids Martial Arts program near you.